Happy Holidays Everyone! We’re excited to announce that we will be bringing several large updates to the server here in the next month! Now with some prep work out of the way, it’s time to give you a look at what will be making its way to the server very soon.

To start off with, a brand new spawn room has been built in order to create a new central hub for the server. Thank you Darkmagic for creating the new spawn lobby! The new spawn room is considerably larger than the current building so it will hit some of the structures that have been built around spawn. Any builds that will interfere with the new spawn can either be moved to a new location at the owner’s request or we will just world edit them back so they will be out of the way. We will be cleaning up the spawn area and putting larger protection on the area to prevent the one time players that build a grass hut next to spawn and sign off forever. We hope you will enjoy the new spawn as much as we do! Here’s a sneak peek! 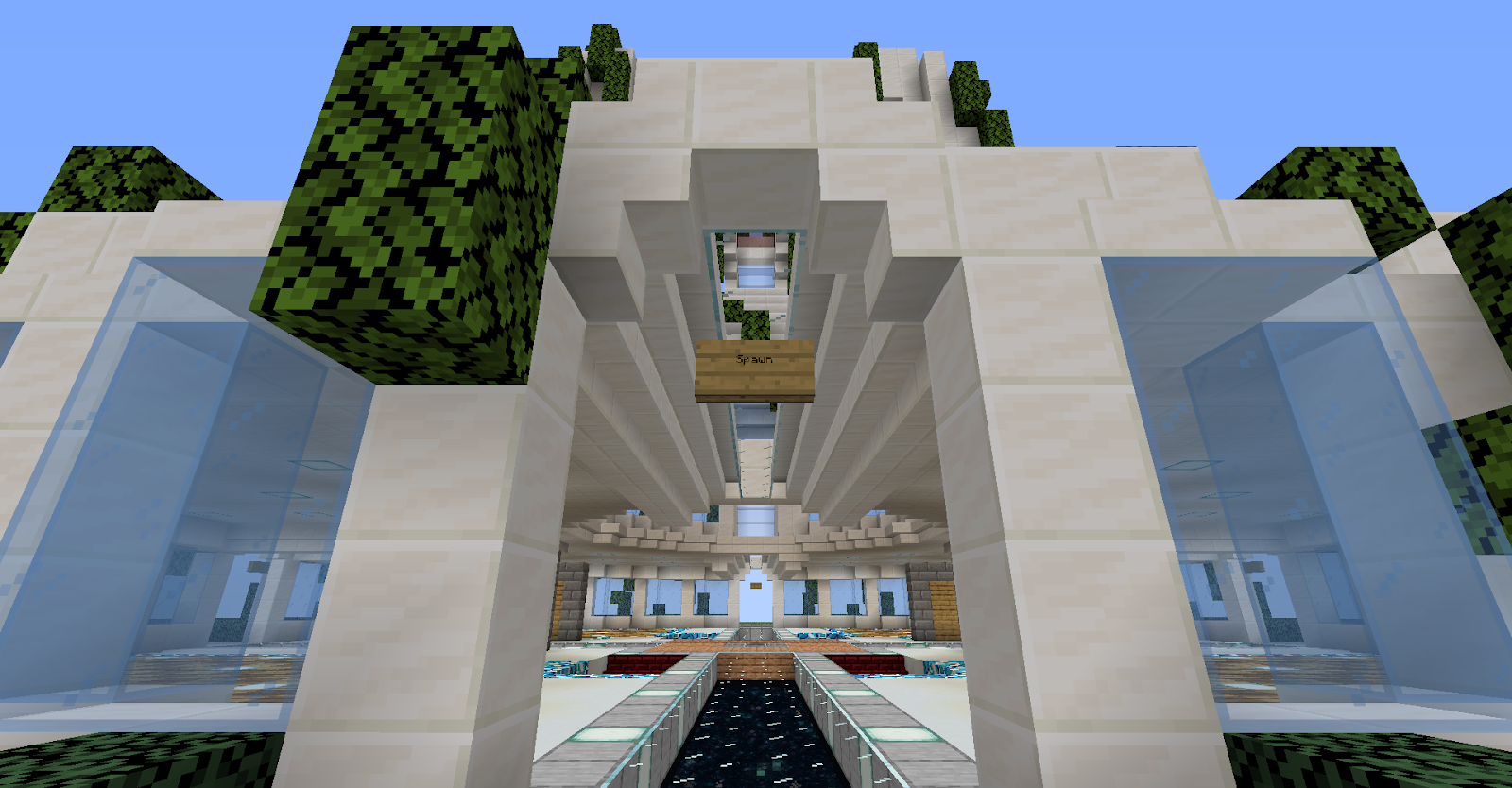 Next on the list, we are doing a complete economy rework and makeover. Our current system was never fully fleshed out nor was a formal system for making money laid out (plus the plugin throwing errors in the console every time someone sets a price). We hope to remedy these problems with a full reset and rework of the system. We will be moving away from the GUI based shops that are accessible via commands in favor of chest based shops as shown here.
!!PLEASE CLEAR OUT YOUR CURRENT SHOPS!!
I will be documenting what is in everyone’s shops, but I really don’t want to go around and spawn everything back. 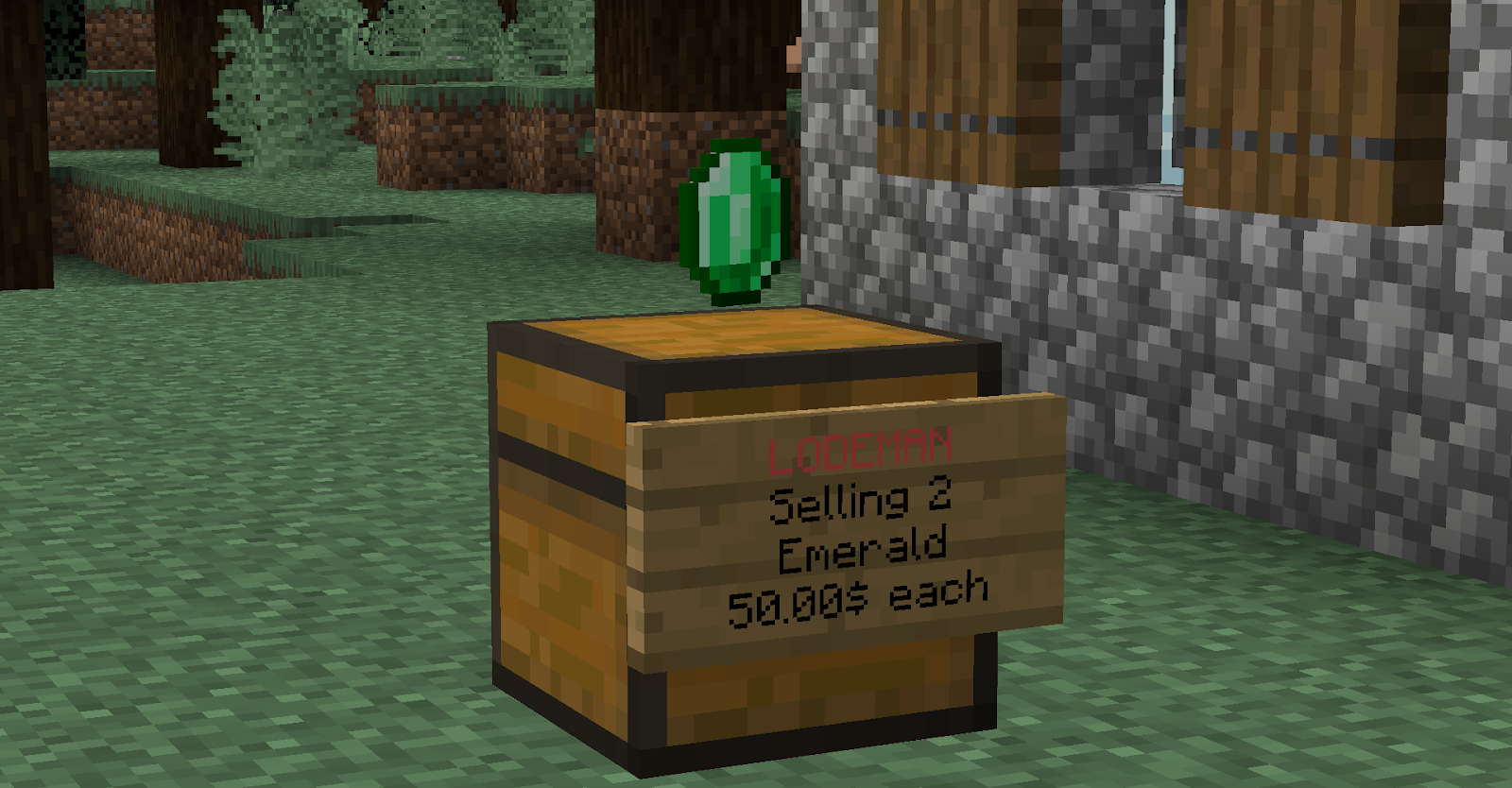 All the shops will be in physical locations, get creative with your shop designs! We hope this will aid in building communities and making destinations that players want to travel too. Now onto how you will actually make money in this new system. We’re moving to a diamond based economy. You will now be able to exchange diamonds for money at guildhalls, which will be scattered across the world in areas like spawn and major civilizations. You will also be able to pay others for services with the /pay command, giving you the ability to hire people or do one on one trades. Did I mention that you can also hire staff for your shops that have the ability to restock your stores while you’re not around? We should probably clarify that trading in your diamonds for money is not permanent. At the guildhalls, you will also be able to exchange money for diamonds if you prefer to carry or stockpile your riches in a physical form. Although the economy is not the focus of the server, we feel having a better way for people to trade goods will strengthen our community and aid in collaborations on big projects.

Next up, we have changes to the ranks on the server. In the past, the only two ranks for normal players were Adventurer and Veteran. We now will be adding two more ranks to that list and buffing the abilities of all ranks. The two new ranks that will be available to players will be Elite & Mystic, thank you Beethovenus for the name suggestions! These new ranks will rank you into them automatically by tracking how much time you’ve spent on the server, and other variables. These new ranks will have many advantages when it comes to building and expanding your territory on the server. Here are a few of the perks you will receive as you climb higher. With Mojang also planning to release Minecraft 1.15 this month, December is shaping up to be an awesome month for Minecraft!

All times are UTC